Claudia Schiffer is a German model who reached supermodel status during the 1990s. She has also appeared in around ten motion pictures, two music videos, and often acted as an assistant to magician David Copperfield in his 1990s stage shows.

Claudia Maria de Vere Drummond (born and known professionally as Claudia Schiffer) was born August 25, 1970 in Rheinberg, North Rhine-Westphalia. She is the daughter of Gudrun and Heinz Schiffer, a lawyer.[1] She has two brothers, Stefan and Andreas, and one sister, Ann Carolin.[2]

Schiffer said that she was popular in high school, but felt socially overshadowed by the other girls in her class.[2] She has revealed that because she was so tall, she became very shy and did not want to be noticed. She was also subjected to jealousy by others as she came from a wealthy family that was well-known locally.[2] Schiffer became fluent in English and French.[2]

She originally wanted to become a lawyer and used to work in her father's law firm.[3] She later dropped these aspirations when, in October 1987 at seventeen, she was spotted in a nightclub in Düsseldorf by Michel Levaton, the boss of Metropolitan Model Agency who signed her up to become a model.[4]

She completed her education and then began to work as a model. She flew out to Paris for a trial photo shoot and soon after she appeared in the cover of French Elle, after being well received in Paris. After several other magazine appearances, she quickly achieved "supermodel" status when she was selected by Karl Lagerfeld to become the new face of Chanel.[4] Schiffer went on to become world-famous, recognizable with her blue eyes, blonde hair and tall figure, standing at 1.80m (approx. 5 ft 11 in.).[5]

In the early 1990s, she starred in highly publicised Guess? jeans adverts in North America which created essential publicity for Schiffer.[4] She was presented on the November 1999 Millennium cover of American Vogue as one of the "Modern Muses".[6] Paul Marciano said in E! Forbes Top 15 Supermodel Beauties Who Made Bank, "Guess name became really much more known around the world because [of] Claudia". Soon after appearing in the campaigns, her name was launched worldwide, appearing on five magazine covers in the United States and seven covers around Europe. Schiffer joined Thomas Zeumer's Metropolitan Models[7] and was contracted to model for Revlon. She also became involved in modelling for several catalogues. Schiffer has done catwalk modelling for Versace, Jil Sander, Dolce & Gabbana, Ralph Lauren and Valentino.[4][2][8] Schiffer was the first model to make the covers of Vanity Fair, Rolling Stone, The New York Times and People.[4] She has also appeared many times on covers of Vogue, Harper's Bazaar, Cosmopolitan, Tank Magazine and Time.[2][9]

Schiffer has also been the face of Spanish clothes store, Mango[8] and Accessorize,[10] and had her ears pierced especially for her Autumn/Winter 2006 Accessorize advertising campaign in 2006.[11] Schiffer still holds a contract with L'Oréal and Ebel watches,[8] and her billboard picture for Kenar has also hung over millions of tourists at Times Square.[2] Since 1990, she has created a swimsuit calendar each year which she stars in and designs herself.[2]

Schiffer later appeared in advertisements for Pepsi, and has danced with a cartoon version of Mickey Mouse in advertisements promoting Fanta for an estimated $2 million.[2] From her appearances in a 1998 Citroën advertisement, she earned a reputed £3 million. Karl Lagerfeld filmed her for a Dom Perignon campaign, some ten years after her first appearances in Chanel adverts.[12] In 2012, she posed again for Guess black and white ads marking the brand's 30th anniversary.[13]

She is signed to several agencies, including d'management group in Milan and 1/One Management in New York City, Simon Fuller's 19 Entertainment in London for her non modelling interests, and her mother agency 'Model Management' in Hamburg.[14]

Schiffer was a judge on Fashion Fringe 2011.

Schiffer launched her eponymous cashmere collection during Paris Fashion Week in March 2011.[4] The Autumn–Winter 2011 season saw her fashion design debut and has been followed by a Spring–Summer 2012 collection.[15] The collection is sold globally in department stores and high-end boutiques. Schiffer is the creative director of the brand.[2][16]

Schiffer has appeared in a number of films and music videos. Her first appearance in film was in the children's movie Richie Rich in 1994 and then starred opposite Dennis Hopper and Matthew Modine in The Blackout.[17] She went on to appear in Friends & Lovers, Black and White and Desperate But Not Serious in 1999, In Pursuit and Life Without Dick in 2001, and then Love Actually in a semi-cameo role. Schiffer has made several other cameo appearances in films, including Ben Stiller's Zoolander in 2001.[3]

Schiffer has appeared on several talk shows and sitcoms, such as Larry King Live, The Late Show with David Letterman, Late Night with Conan O'Brien, Dharma & Greg and Arrested Development. She was also in boyband Westlife's music video for "Uptown Girl", and in 2000, she made a cameo appearance in Bon Jovi's video for "Say It Isn't So".

She has released four exercise videos, entitled Claudia Schiffer's Perfectly Fit, which were successful and reached the bestsellers list.[2] Schiffer has hosted the French Fashion Awards and the World Music Awards in Monaco.[2]

With fellow models Christy Turlington, Naomi Campbell, and Elle Macpherson, Schiffer was joint owner of a chain of restaurants called the Fashion Café in 1995.[3] Schiffer remains a prominent figure in German society and helped present and carry the trophy with Pelé during opening ceremonies at the 2006 World Cup. She also presented Prince William with a polo trophy in 2002.[1]

When talking about the model profession at present, she said: "Supermodels, like we once were, don't exist any more." She has said Gisele Bündchen was the only person who comes close to earning the supermodel title.[18]

Early in her career, Schiffer was romantically linked to a number of celebrities including Bon Jovi guitarist Richie Sambora, Prince Albert of Monaco and singer Peter Gabriel.[19]

From 1994 to 1999, Schiffer was married to the American illusionist, David Copperfield. They first met in October 1993, when Schiffer attended one of Copperfield's shows and he invited her on stage to participate in a mind-reading act and his "Flying" illusion. A month later, she joined Copperfield on an appearance on live German TV. During this appearance, Schiffer assisted Copperfield in a traditional "Thin Model" version of the famous stage illusion, "Sawing a Woman in Half", with Schiffer being sawed in half by Copperfield and the show’s host, who used a large two-person saw to cut her in half. Having sawed Schiffer in half and separated her halves, Copperfield then tickled her feet, causing her to scream with laughter and complain (in German) that she was ticklish. While she was still in two pieces, she was interviewed by the show's host, who asked her what it felt like to be sawed in half. Copperfield then asked her out on a date and, after she agreed, he finally put her back together in one piece. Shortly after this, they became engaged, and married the following year. While they were married, and when not otherwise occupied with her modelling work, Schiffer often joined her husband in his stage shows as a special guest assistant in a number of illusions. During the show, she would be levitated high into the air, made to vanish and re-appear, beheaded by a full-sized guillotine, and finally sawed in half.[20] Usually, this would be in his Clearly Impossible illusion, although on occasion he would use his antique Buzz Saw illusion that had formerly belonged to actor and magician Orson Welles. On at least one occasion, he performed his "Blade" vertical sawing on her. She also appeared in Copperfield's 15 Years of Magic special, playing the role of a reporter interviewing him about his career and the existence of true magic.[21][22][23]

"Many have seen the classic magic trick in which a woman in a box is sawed in half onstage. But how many have seen the same trick performed using a glass box? And what if the woman in the glass box is one of the most beautiful and famous in the world? That's exactly what the audience at the Orange County Performing Arts Center in Costa Mesa saw yesterday at the climax of the latest show from superstar magician David Copperfield. In addition to his usual bevy of glamorous assistants, Copperfield was joined in the show by his supermodel wife, Claudia Schiffer, and it was she who ended up quite literally beside herself after Copperfield sawed her in half in the most impossible-looking version of the famous illusion the audience had ever seen... Having locked his wife inside a glass-sided box, Copperfield and an audience member sawed her in half and pulled her apart - Much to the amazement of the rest of the audience, who had an unobstructed view of her body within the box at all times throughout the illusion." - The Los Angeles Times, December 19, 1995.

While they were married, she often acted as the test assistant in many of Copperfield's new illusions while they were under development. In addition to some which later featured in his TV specials and stage shows, this also included a number of other illusions which have never been performed publicly. Copperfield also devised a close-up magic trick especially for her to perform, in which she used a blunt darning needle to pass a length of knitting wool through her (as it was then) unpierced earlobe.

In 1997, Copperfield and Schiffer sued Paris Match for US$30 million after the magazine claimed their relationship was a stunt, that Schiffer was paid for pretending to be Copperfield's wife and that she didn't even like him.[24][25][26] In 1999, they won an undisclosed sum and a retraction from Paris Match.[27] Herbert L. Becker, who Copperfield asked to give testimony regarding the validity of the relationship, gave convincing testimony that the relationship was real. Copperfield's publicist confirmed that while Schiffer had a contract to appear in the audience at Copperfield's show in Berlin where they met, she was not under contract to be his "consort".[28]

Following the end of her marriage to Copperfield in 1999, Schiffer became romantically involved with the heir to the Green Shield Stamp empire, Tim Jeffries.

On May 25, 2002 she married film producer Matthew de Vere Drummond, né Matthew Vaughn, son of George Albert Harley Drummond (also known as George de Vere Drummond). Because her father-in-law and husband are both in the line of succession to the Earldom of Oxford and Mortimer, it is possible that Claudia could one day become the Countess of Oxford. Following their marriage, Claudia took her husband's name and is now officially known as Claudia de Vere Drummond, although she continues to be known as Claudia Schiffer for professional purposes.

Claudia and Matthew have three children: a son, Caspar Matthew De Vere Drummond, born on January 30, 2003 and two daughters, Clementine, born on November 11, 2004, and Cosima, born on May 14, 2010. All three were born in London, where Claudia and Matthew now live.

Schiffer had two significant problems with harassment in the past. In 2002, an Italian kitchen porter was arrested after making nine visits to Schiffer's £5 million Coldham Hall[29] mansion near Bury St Edmunds, Suffolk, attempting to see her. Charges against him were dropped however, as he was sectioned under the Mental Health Act.[30] He believed that the Pope had told him to marry Schiffer.[31] In 2004, a Canadian man was accused of harassing Schiffer, also at her mansion in Suffolk. He called at her mansion in the hope of seeing her.[30] He also repeatedly left letters at her home.[32] 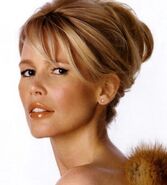 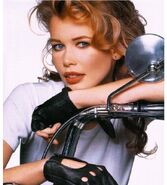 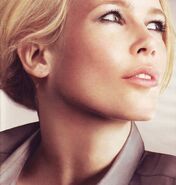 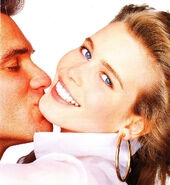 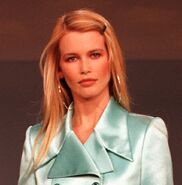 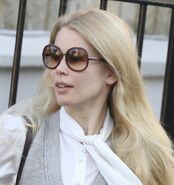 Add a photo to this gallery

Retrieved from "https://celebrity.fandom.com/wiki/Claudia_Schiffer?oldid=8510"
Community content is available under CC-BY-SA unless otherwise noted.