Celebrity Wiki
Register
Don't have an account?
Sign In
Advertisement
in: Celebrity magician's assistants, Celebrities who've been sawed in half 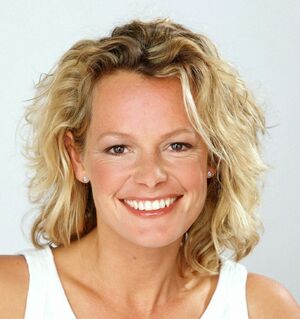 Katherine Mary 'Kate' Humble (born 12 December 1968 in Wimbledon, London), is a UK television presenter. She works mainly for the BBC, specialising in wildlife and science programmes, and is also an active participant in many environmental and conservation campaigns. She is also the current President of the Royal Society for the Protection of Birds (RSPB).

Born to Nick Humble and Diana Carter, Kate grew up in Bray in Berkshire and attended the Abbey School in Reading, Berkshire, where she admits she wasn't the best student the school had ever had.

"I was a very bad student. I had a fantastic Latin teacher which did mean I did Latin A Level but other than that my school career wasn't something to be proud of."

After leaving school she travelled through Africa from Cape Town to Cairo, doing various jobs including waitressing, driving safari trucks, working on a crocodile farm and performing as a magician's assistant - "I was the girl who got sawed in half". She has returned to Africa many times since. In 1994 she travelled around Madagascar, the subject of her first article for the Daily Telegraph travel section. Since then she has written articles about diving and cycling in Cuba, an 'exploding' lake in Cameroon, and hippopotamus conservation work in Ghana.

Kate started her television career as a researcher for the BBC, later transferring to presenting programmes such as Top Gear, Tomorrow's World and the 2001 series The Holiday Programme - You call the shots where the team travelled the world doing whatever viewers recommended using the then novel media of text messaging and emailing the team as they travelled.

Most recently, Kate has specialised in presenting wildlife programmes, including Animal Park, Springwatch with Bill Oddie, Wild in Africa and SeaWatch.

In 1990 she appeared for the first time as an actress in a TV production The Secret Life of Ian Fleming - and was credited as "Lauren Heston .... The redhead". This later led to some mild embarrassment for her, due to the nude love scenes included in this production.

Kate presented The Blue Planet Live! on the 2008 UK tour at Wembley Arena, St. David's Hall in Cardiff and at Symphony Hall in Birmingham.

Her latest BBC television series is The Hottest Place On Earth, a record of a month spent living with the Afar people in Ethiopia's hostile Danakil Depression.

She occasionally performs on the lecture circuit with a show based on her experiences with wildlife, titled Harassed by Hippos and Battered by Cod: A Humble Way to Make a Living.

On 16 February 2009 she debuted in Countdown's Dictionary Corner.

She founded the web site Stuff Your Rucksack that helps organisations around the world find the items they need by matching them with travellers.

From 2000 to 2005, she presented a BBC series called Rough Science, in which a number of scientists were set various challenges to be solved using just basic tools and supplies.

On 29 July 2009, she was the subject for the programme Who Do You Think You Are?, where she discovered that she had family connections to the Hartley Colliery Disaster. Her paternal grandfather, Bill Humble, was a test pilot who tested the Hawker Tempest and her maternal grandfather, Stan Carter, served as an officer in the RAF and after being shot-down was held as a prisoner of war in Stalag Luft III at the time of The Great Escape.

Kate is married to television producer Ludo Graham. They first met when she was aged 16, married in Newbury, Berkshire on September 12 1992, when she was 23, and have two sons, Bertie (born 1994) and Lawrence (born 1996). They have recently (2007) moved from Chiswick, West London to the Wye Valley, where they have wanted to live for 'A very long time'.

In an interview in 2007, Kate revealed her enjoyment of public nudity -

"One of life's great joys is dancing naked in the sun. It makes me feel so good. Even now, there are all sorts of places in the world where you can take your clothes off and not be seen."

Community content is available under CC-BY-SA unless otherwise noted.