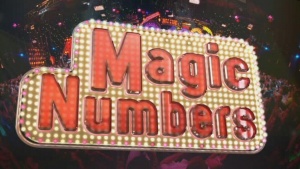 Magic Numbers was a British television show presented by magician Stephen Mulhern, in which celebrity contestants answer questions or take part in challenges to generate a sequence of 6 numbers. Members of the public then call a Premium-rate telephone number if their home or mobile phone numbers contains two or more of these digits. Callers are entered into a prize draw to win the chance of competing for a prize of up to £350,000. Throughout the show, Mulhern would also perform a number of magic tricks or illusions, assisted by some of that week's celebrity guests. While the initial public phone-in was taking place, Mulhern would also perform a featured grand illusion, again assisted by one or more of that week's celebrity guests.

The show is very similar to a previous ITV show, Talking Telephone Numbers, the key difference being that viewers of Magic Numbers can call in if two of the numbers match their phone number, rather than five as on the previous show. This was a technique employed by ITV to generate more calls, and hence higher revenues from the show.

The show was created by CPL Productions and Paul Brassey and commissioned by John Kaye Cooper at ITV.

Episode 1 aired on Saturday 17 July 2011 on ITV with special guests Holly Willoughby, JLS and Twist and Pulse. The featured illusion was Holly Willoughby being sawed in half in Stephen's Clearly Impossible sawing.

Episode 2 aired on Saturday 24 July 2011 on ITV with special guests Diana Vickers, Alistair McGowan, Amanda Holden and The Baseballs. The featured illusion was Diana Vickers being sawed into three in the transparent box version of the Sawing in Thirds illusion.

Episode 3 aired on Saturday 31 July 2011 on ITV with special guests Louie Spence, Paddy McGuinness, The Magnets and Scouting for Girls. This episode's featured illusion was the Guillotine, performed on Louie Spence.

Episode 4 aired on Saturday 7 August 2011 on ITV with special guests Emma Bunton, Eamonn Holmes, Ruth Langsford and The Saturdays. In this episode's featured illusion, Compressed, Vanessa White from The Saturdays was placed into a box with her head projecting from the top and her feet from the bottom. The box was then reduced in height until her head was immediately adjacent to her feet - her body in-between having apparently been compressed into a space of just a few inches.

Episode 5 aired on Saturday 14 August 2011 on ITV with special guests Kym Marsh, Alex Reid and McFly. The featured illusion in this episode was Kym Marsh being beheaded in the Head Mover illusion.

Episode 7 aired on Saturday 28 August 2011 on ITV with special guests Denise van Outen, Katherine Jenkins and Olly Murs. The featured illusion was Stephen and Olly Murs sawing Katherine Jenkins in half in the British premiere of the Crystal Sawing illusion. It was originally planned that this illusion was to have been performed the previous week with Alexandra Burke as the assistant being sawn, but she was unable to rehearse it due to illness. So it was postponed and Stephen invited Katherine Jenkins onto the show to take part in it, having remembered a conversation he'd had with her about her ambition to be sawed in half.

Retrieved from "https://celebrity.fandom.com/wiki/Magic_Numbers?oldid=7113"
Community content is available under CC-BY-SA unless otherwise noted.