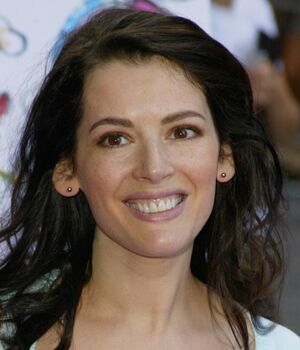 Nigella is the daughter of politician Nigel Lawson and sister of Dominic Lawson, the former editor of the Sunday Telegraph. Her mother was society beauty Vanessa Salmon, heir to the Lyons Corner House empire who died of liver cancer in 1985. Her sister Thomasina died of breast cancer in 1993 while in her early thirties.

She attended the Godolphin and Latymer School before graduating from Lady Margaret Hall, Oxford. She then wrote a restaurant column for the Spectator before becoming deputy literary editor of the Sunday Times in 1986. She has had two television cooking series broadcast in the UK on Channel 4: Nigella Bites in 2001 and Forever Summer with Nigella in 2002, both of which have accompanying recipe books.

Her style of presentation is sometimes gently mocked by comedians and commentators (particular a regularly occurring impersonation of her in the BBC television comedy series Dead Ringers) who perceive that she plays overtly upon her undoubted attractiveness and sexuality as a device to engage viewers of her cookery programmes, despite Lawson's repeated denials that she purposely does so. That said, her fans appreciate her natural and non-technical approach to the pleasures of cooking and eating. Like many contemporary cookbooks, her tomes are lavishly adorned with colorful and cutting-edge food photography, but her most unique contribution is perhaps a dedication to the sensuality of language.

She was married to journalist John Diamond, who died of throat cancer in 2001, with whom she had two children, Cosima and Bruno. They met in 1986 when they were both writing for The Sunday Times. She married Charles Saatchi (17 years her senior) in September 2003.

She currently hosts a daytime TV programme on ITV1 titled "Nigella!" in which celebrity guests join Nigella in the kitchen.

Retrieved from "https://celebrity.fandom.com/wiki/Nigella_Lawson?oldid=6937"
Community content is available under CC-BY-SA unless otherwise noted.